If you have ever googled, the efficiency of a gasoline engine, you have likely found something like this: 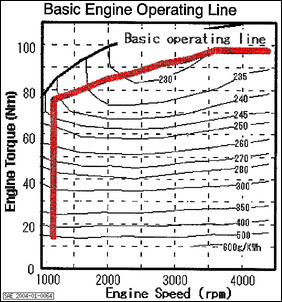 While this is very much a standard diagram to see, by the end of this post I am going to replace it with a different figure that has the same information on it, just rearranged.  The beauty of the replacement figure is that it will show that at any given engine speed, the engine output power increases linearly with the amount of gasoline flowing in to the engine.  It will show that this is true except at very high flow rates of gasoline into the engine, where the power output of the engine is seen to "saturate," the engine becomes less efficient at converting gasoline to output energy when the gasoline is flowing in to the engine very fast.

If the dynamometer measures the engine output shaft rotation speed at the same time as it measures the braking torque on the output shaft, we can easily calculate the power that the engine is dumping into heating up the brake.  Torque times rotation speed gives power.  To get power in the standard metric system unit of Watts, the engine speed needs to be expressed as an angular velocity in radians per second. To do this, the RPM measurement is divided by 60, to convert it to rotations per second, then multiplied by 2π to convert it into radians per second.

The way you use a dynamometer to get the figure above is you set the engine accelerator to a fixed setting.  Then you adjust the braking force over a range of values.  At each braking force, you measure 1) the braking torque, 2) the engine rpm, and 3) the fuel consumption, typically in grams per second.  At each x,y point you have measured, you know how many Watts (W) are being produced in rotational motion of the engine shaft because at that point you can multiply the torque by the angular velocity corresponding to that point.  Since you have also measured the gasoline consumption in grams per second (g/s), with a little straightforward math you can calculate the number of grams of gasoline that would be required to produce a kWh of rotational output energy.  kWh is "kilowatt-hour," it is the amount of energy that a 1000 W power source produces in 1 hour.  1 kWh = 3,600,000 J.

The contour lines on the BSFC map are lines of constant energy efficiency.  At any point on, for example, the 280 g/kWh contour, the engine produces 1 kWh of output energy for every 280 g of gasoline that it consumes.  One can see from the chart that the engine is most efficient at an engine speed of about 2700 rpm and an output torque of 95 Nm.  At this efficient point, by using the math above we calculate the engine is putting out about 26.9 kW.

One last little bit of mathematical conversion.  A gram of gasoline can be burned, and when it is burned it releases a certain amount of heat energy.  The amount of energy released is slightly variable because the mixture of hydrocarbons in gasoline is slightly variable depending on how it is formulated at the refinery.  The US EPA has settled on 33.7 kWh as a standard estimate of the energy content of one U.S. gallon of gasoline.  This translates to about 12.2 Wh/g energy content of gasoline.  So the contours of gasoline usage in units of "g/kWh" can actually be simplified to a pure energetic efficiency.

280 g of gasoline release 3.425 kWh of heat energy when burned.  but near the most efficient point of the engine shown in the BSFC fuel map above, we find we are able to get 1 kWh of rotational energy out of this engine for each 280 g of gasoline burned in the engine.  This means that the energy conversion efficiency of this engine operating on that 280 g/kWh contour is 1/3.425 = 29%.  That is to say that when this engine is operating at any point along the 280 g/kWh contour, is converting 29% of the thermal energy of the gasoline it is burning into rotational energy at the output shaft of the engine.

Finally, we combine all that we have said above and reformulate the BSFC fuel map into the following: 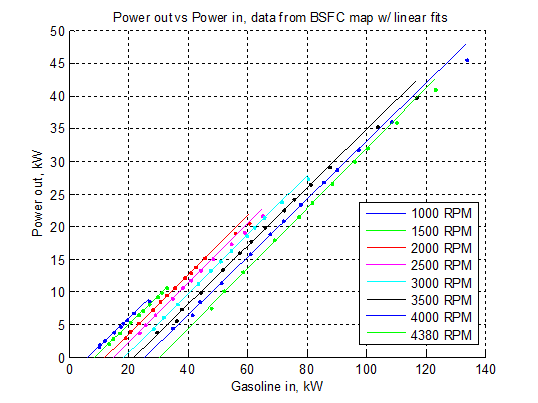 Here, the different colored dots come from digitizing points on the BSFC map above, and converting them so each one shows its output power, the rotational power of the output shaft of the engine, vs its input power, the heat energy of the gasoline flowing in to the engine to produce that output power.  We group data points by RPM.  At each RPM value, we find the best fit straight line through the points at that RPM.  What we find is generally: 1) at lower RPM, we convert gasoline heat energy into rotational energy more efficiently.  2) To get higher total output power, we need to go to higher RPM, but this costs us a little bit in efficiency.  3) at the high power end of each RPM value, there is some "saturation" visible: the output power falls below the best fit line.  The engine is a little less efficient when a lot of gasoline is flowing in to it then when less gasoline is flowing in to it.

We can rearrange the data in the Power out vs Power in plot by creating a y-axis showing values of Power_out / Power_in = Efficiency.  Here is that plot: 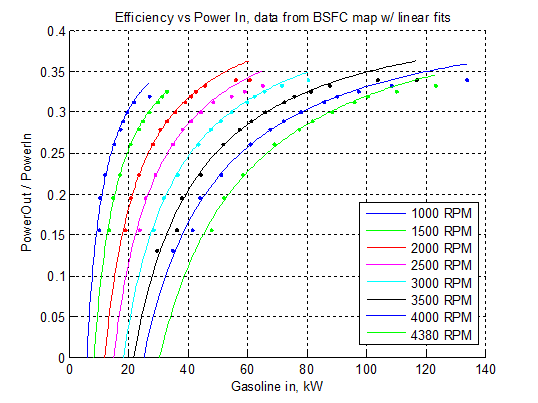 Note that each output line has an x-intercept, a value of gasoline flow into the engine which can keep the engine turning at this RPM value, but which produces no additional power at the output of the engine.  This is the fuel flow into the engine that is required to keep the idling engine turning at the specified RPM.  One could explore the points along the x-axis by putting the car in neutral gear, and revving the engine with the gas pedal.  If while doing this, you were able to measure the gasoline consumed at each RPM value, you would expect to measure directly the x-intercept values shown in this figure. 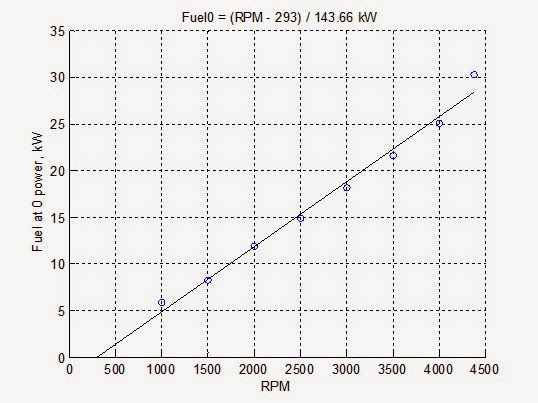 Here are plotted the x-intercept values, vs RPM.  Essentially this is a plot of the fuel flow rate required to keep the engine idling at a particular RPM value.

Posted by RaplhCramden at 4:48 PM No comments: